Well I didn’t get to my vendors booth all day. I had some fun trying to get registered for the convention. Turns out the organizers mailed the package to my house in Canada. Those of you who know me, know my house is not exactly the place I often visit! So without a package I asked the charming ladies of the registration counter to perhaps get me a badge and tickets so I could start enjoying the convention. They were very nice and tried their best to find out anything but after an hour of waiting I went in search of additional help.

I headed over to the VIP desk, but they told me I was just a performer and the other desk would look after me. Back I went to meet Arthur Casson, the convention registration chairman. I told him my name was Shawn Farquhar and that they did not seem to have a package for me. His reply was that the package was mailed and if I didn’t have it then I would most likely be without tickets to the Sunday Gala. He gave me tickets to the Saturday Gala and I told him I wouldn’t need those as it was my understanding I was on the Saturday evening show. His reply, “oh you’re performing here?”. I have never felt so much love. Now with badge in hand I headed off to the hotel to take a nap as the event up to now had been quite stressful and I had just a few hours before I had to lecture.

I was an hour into my “jet lag” induced nap when the front desk called my room to tell me I was late for my “stage act rehearsal” in the Opera House. I am never late for a rehearsal and besides he show isn’t until tomorrow night so why would they need to rehearse today? Turns out I was late for a rehearsal. I was later to find out someone just left a note on the chair of my vendors booth earlier in the day with a schedule of rehearsals …

The rehearsal was quick and to the point and the crew of the theatre and club members backstage were outstanding. I was less than totally coherent during the run through as I was still half asleep. I did however get the understanding that the Saturday Gala was billed as a competition of the UK vs the World. What an odd idea for a gala. If I had known it was going to be billed as a competition I would not have agreed to perform.

Now with that out of the way I headed back to the fabulous Gresham Hotel to prepare for my evening lecture. I was even more thrilled to hear my event was up against the British Close Up Championship. This I felt meant I would have a very small audience and not much exposure for my magic. 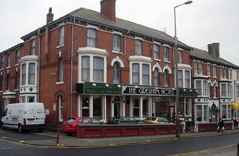 I was so wrong… My lecture was standing room only with people out in the hall ways looking in to see what all the fuss was about. I was only given an hour to lecture and the traditional 30 minutes to sell following. I had a great group of tech working for me and the video projector they set up made the lecture perfect. I always travel with my own projector and camera but having professional working their own made it “Easy”. My lecture last 1 hour and one minute and they really seemed to like the stuff. I wish I could have done everything and explained things better but I just didn’t have enough time. I think the organizers should seriously consider extending lecture to 90 minutes to allow for better explanations and more material to be covered. As I said my thanks and left the stage the table where Lori and Simon were standing was mobbed and my effects were being snatched up very fast. I tried to make my way to the crowd and got stuck signing autographs and taking photo’s. I love this part of my job. That people like my magic is the true mark of my success. I would love to have basked in the moment but 10 minutes into it the security guard started shouting that everyone had to leave now. Within 13 minutes of finishing my lecture everyone was out of the hall and I was even in the hallway with out my lecture material. I explained I needed to get back in to get my stuff and the security guard was annoyed as he was in a hurry to be done. What a glorious way to end my first day at the Blackpool Convention.

Another persons opinon of my lecture can be found at this blog by Naquada. Don’t be thrown off that he begins by calling me Steve. Calling me names other than Shawn became a theme of this convention ….